While some countries can’t even conclude whether to legalize cannabinoids like CBD that have shown in testing to have significant medicinal benefits without the psychoactive effects, Uruguay has been way past that for quite some time! If you are a citizen or visiting the country on holidays, read this legal guide to know how to buy high-quality cannabis in Uruguay.

In this article, we have tried to cover all the information you need to know before buying weed seeds in Uruguay. This guide includes the history of cannabis in Uruguay, marijuana legalization related to possession, consumption, cultivation.

It also has vital information about the Sales and purchase of cannabis in Uruguay. So, hang in and read on to know more!

Let’s open some chapters of the history of cannabis in Uruguay!

It’s unknown exactly when cannabis first came to South America, though historians accept that the Spanish brought the plant with them when colonizing the continent.

There’s proof that the antiquated cultures of Mesoamerica were using various plants for traditional sacred rituals.

Their connection with cannabis is unknown, but what we can guess is that, when cannabis finally showed up in the country, it was recognized and valued for its psychoactive properties.

In short, this was most likely nothing new to the people that lived there.

The Spanish not just brought cannabis to the continent, but they also set up large hemp plantations. Extensive cultivation continued for several centuries after.

Uruguay is unique because cannabis use was never classified as a criminal activity, even at the height of prohibition in the US, who is an enemy of cannabis fervor that spread worldwide.

As such, it looks appropriate that they should be the first nation to legalize its use for recreational and medicinal purposes completely.

Cannabis seeds are legal to use, purchase, and sell. It is agreeable to cultivate plants from them, and they can be freely gifted or shared too.

However, as you are not allowed to take marijuana out of the country, they cannot be sent out from Uruguay to other parts of the world.

Let’s explore something more about the rules!

What are the Rules to Possess and Consume Cannabis in Uruguay?

It is legal to possess and use weed in Uruguay. Certainly, it was the first nation in the world to legalize recreational cannabis in 2013. 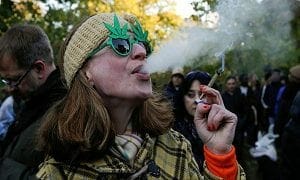 Uruguay has never listed the personal use of drugs as a criminal activity. In 1974, the government passed a law, enabling judges to choose whether they possessed drugs for personal or business purposes.

President Mujica took this a step further and presented his plans to legalize cannabis entirely in Law 19.172 in 2012. The intention was to reduce organized wrongdoing and the social problems associated with it.

The law currently states that individuals may access as much as 10 grams of cannabis per week. It ensures retailers aren’t placed under excessive stress by buyers wishing to mass purchase once per month.

Initially, the law also guaranteed a price of $1 per gram of cannabis. The exact price has changed since then (going down, rather than up), and this ensures the government has a competitive edge over illegal suppliers.

In various ways, the medicinal marijuana laws in Uruguay are the same as for recreational usage.

Patients have to register with the Institution of Regulation and Control of Cannabis (IRCCA) through their local post office. When registered, they would then be able to purchase medicinal cannabis products at a drug store.

The limits are precisely the same: 10 grams per week, and nearly 40 grams per month. One specific issue is that the medicinal program permits patients beyond 18 years old to use cannabis. It might be tricky for kids with conditions like epilepsy, for instance.

Interestingly, Uruguay also allows patients in prisons to be treated with medicinal marijuana, with a registered doctor’s approval.

People often use marijuana to treat prisoners who are dependent on cocaine base paste (‘paco’), a toxic result of cocaine manufacture.

To make Uruguay a global player on the medicinal marijuana market, the government is considering large-scale export operations.

What about CBD in Uruguay?

CBD is legal to use, buy, and sell in Uruguay. However, it isn’t easy to get.

For instance, a patient requiring CBD to treat their epilepsy has access to one product – Epifractan. Yet there are four different marijuana varieties available in the retail outlets, and recreational weed users can also cultivate their own plants at home or as a significant aspect of a cannabis club.

In comparison, cannabis is around $1 per gram, Epifractan costs around $200.

It isn’t a choice financially for some residents in the country.

The research found that two-thirds of people who used CBD in Uruguay obtained it from unauthorized ‘artisan’ producers. It means that it’s unregulated, which is especially hazardous for those self-medicating for a health condition. 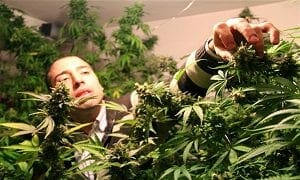 President Mujica passed a bill in 2013, permitting individuals to grow up to six plants for non-business purposes. Also, the full measure of cannabis delivered needed to rise to less than 480 grams per year.

Additionally, it also legalized and allowed registered smoking clubs to grow 99 plants per year. These clubs must have 15 to 45 members, and every part may purchase as much as 480 grams per year.

The law also enabled larger-scale growers to cultivate cannabis, but just with an official license.

When explaining his judgment, the president stated that the country needed to contribute to humanity by making the drug legal to cultivate, but would review the situation if the experiment didn’t go according to design.

Hemp in Uruguay – Is the Cultivation Legal?

Like cannabis, hemp is legal to grow in Uruguay. Indeed, a large number of the country’s hemp farmers are optimistic about their prospects because of one key factor.

The government regulates the recreational cannabis industry, which tells retailers what they can sell and what products they are not able to sell. The hemp industry is not controlled in the same way, which indicates more freedom for growers.

Gaston Rodriguez Lepera, a licensed producer of recreational cannabis in the country, comments

“Uruguay still has an opportunity to build up an industry in areas that aren’t as thorny as recreational pot, [like] socially adequate ventures like medicinal marijuana or industrial hemp.”

Selling Cannabis in the Uruguayan Market

In 2013, the authorities passed a bill to legalize and regulate the sale of marijuana.

Julio Calzada, the Secretary-General of the National Drug Council of Uruguay, emphasized that the government would be in charge of regulating cannabis production.

He stated that adults above 18 years old could purchase as much as 40 grams of cannabis every month. Foreigners cannot buy cannabis, which effectively stamped out any prospect of ‘cannabis tourism.’

Carrying it across international borders would still be considered as a criminal offense.

Retailers must sell cannabis in boxes with warnings on them, outlining the possible risk to health just like tobacco packaging. Also, cannabis must not be on display to the general public, and it must contain close to 15% THC.

Although the government passed the law in 2013, it took a further three and a half years before the first retailers could sell weed to customers.

The reason for the postponement was the hesitance of pharmacies to commit to selling it. Uruguay’s drug store association (AQFU) strongly opposed the sale of cannabis for non-medicinal uses and was worried about unfair competition. Despite such obstacles, cannabis finally went on sale in 2017.

Black Market of Cannabis in Uruguay

There has been no change in compulsion or other adverse side effects. Consumers are happy, and the general opinion is increasingly in favor of the move.

But there is a paradoxical marvel occurring – the black market continues to sell the drug while the spin-off industry has failed to take off.

Marcos Baudeán, a member from the study group Monitor Cannabis Uruguay, suggests it might be worse than that: “Consider the fact that there are 55,000 regular consumers who are responsible for 80% of the marijuana consumption in the country, but at present just 10% are consuming from the legal market, the rest are buying the drug off the illegal market.”

How to Buy High-Quality Cannabis in Uruguay 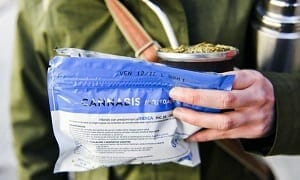 Purchasing cannabis seeds in Uruguay is a genuinely simple process. To legally buy cannabis, some rules and restrictions apply, such as:

You can generally depend on local dispensaries that substitute as seed banks or even Uruguayan seed banks as well for your cannabis needs.

However, many cannabis lovers are looking for high-quality cannabis seeds, which doesn’t come with a guarantee with a local store.

Finding a cannabis seeds retailer that you can trust is important for growing unique cannabis. There are numerous reliable seed banks available in the market which offer a great assortment at affordable prices.

If you want to give seed bank a shot, we suggest you begin with Crop King Seeds and MSNL.

Can the Visitors Buy Weed in Uruguay?

There are no sales of marijuana to visitors to Uruguay. To have the option to purchase weed, you should be Uruguayan or a resident.

So no, Uruguay is not anything like Amsterdam. Besides, there are no brown cafes, but all are not lost.

Moreover, Uruguayans are very-friendly about offering their locals. But say you are a visitor to Uruguay and someone offers you a joint or some marijuana as a gift – it’s yours for the smoking! 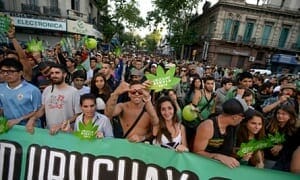 Despite Uruguay’s cannabis laws being highly progressive, a public attitude perhaps isn’t quite so liberal.

According to one survey shortly completed after the authorities passed the law, two-thirds of the public opposed the decision. A further study from 2017 found that opinions had shifted slightly, with just over a portion of respondents going against the legal status of the drug.

Many people still believe that cannabis is a ‘gateway’ drug that leads users onto harder drugs like heroin and cocaine. They also accept that the laws will worsen security within the country.

The cannabis clubs of the country offer individuals a choice to retail outlets, letting them grow their plants as a larger group component.

However, there are a couple of rules that the clubs must follow — for instance:

Expo Cannabis is a platform of information and explanation on medicinal, therapeutic, and industrial cannabis, which broadens the knowledge about the different uses of the plant and collaborates with developing a severe and dynamic industrial sector.

It represents a great blend of the public sector, social organizations, private agents, the institute, the cannabis community, the curious, and general society.

It is a unique show with international guests and the presence of the best local artists.

The latest event in 2022 will take place on 4-5-6 December. If you don’t want to miss your opportunity and buy the tickets, Click Here!

When Uruguay introduced its legalization policy in 2012, the officials considered it an experiment in the war against drugs.

Presently in operation for a couple of years, the country is still working out the supply and banking kinks and even streamlining it.

A final thought on how appropriate or useful it has been to check violence or hose the illegal cannabis exchange is still difficult to say.

It seems like the Uruguayan government has done well in addressing the needs of the average cannabis user, so it will be a concern of adapting and refining to make the rules that much better for the future.

Watch the following video by BBC on marijuana legalization in Uruguay to know more!