How many times have you asked yourself – “How many grams in an ounce?”

Too many of us wonder about this, right?

In this post, we have sought to end the debate of how many grams in an ounce when talking about marijuana. We will get technical in the calculations in this post.

We will make it as simple as possible for everyone. We are also going to talk about some other things as well, which include questions like how is cannabis sold in the market and how it is measured.

Many people, when they think about how many grams in an ounce get confused between imperial and metric systems of measurements.

We will solve all your questions today.

At the time of buying cannabis, it is very important that you get exactly the amount you are paying for each time. Now weed being like legal in many states in the US, it is very vital to get that perfect amount of weed.

The only problem you are going to face in terms of measurements is that when you buy your cannabis from backstreet nobody, then you might not be getting the exact amount because all of the dealings are on the roadside and without and measuring equipment.

So how would you know if there is enough weed in your, let’s say, 10-gram bag? We will also show you how much physical weed is there in a 1-gram bag of weed.

The best way to measure your bud production when growing marijuana indoors would be to buy a kitchen scale.

So how many grams in an ounce? Well, we will answer that by showing you how much weed you get in a gram and in an ounce. First things first, let’s talk about the measurement systems.

There are two different ways people weigh marijuana. In the US, the weed is generally measured in ounces. Whereas, everywhere else in the world, the cannabis buds are weighed by grams.

If you ask us, we prefer to use the metric system, it is more efficient and widely used around the world.

Which measurement system to use?

The usage of the measurement system will depend on individuals as well as on how much weed they produce.

If you are producing and processing large amounts of weed, then it would be wise to use the metric system with its Kilograms units.

On the other hand, if you are dealing with a small amount of cannabis, then using the imperial system is good. This is good because the American system has smaller units than the metric one.

But ultimately, there is no general procedure on using the units. It’s up to the individual.

How to check the weight of cannabis at home?

Another way is to use a ruler. Take a ruler and make a see-saw out of it. Place a penny on one side and marijuana on the other side. When both sides are equal, and in equilibrium, the cannabis’s weight would be 2.5 grams.

Let’s talk about the individual weights now, shall we?

How much weed in a gram?

A gram is the smallest marijuana quantity. Generally, if you look at a gram of marijuana, it doesn’t look a lot. With 1 gram of marijuana, you would maybe smoke two joints. If you are very conservative, maybe three joints but not more than that.

If you are going to buy a new strain for experimenting, then you should probably try out a gram first to see what kind of experience, taste, smell, and high it offers.

The price of a gram of cannabis can go from $7 to $15 depending upon many factors like strain, place, etc.

The photo below shows what a gram of weed would look like.

How many grams in Eight Marijuana

This is one of the most common marijuana weights that are being sold on the market. It is eight of an ounce in weight. In terms of grams, an eighth would be equal to 3.5 grams.

If you are a casual smoker who doesn’t go too high all the time, then this is a great option for measurement. With an eighth of marijuana, you will be making around seven joints.

The price of an eighth of marijuana would set you back anywhere between $25 to $30.

Check out what an eighth of weed looks like in the photo below. 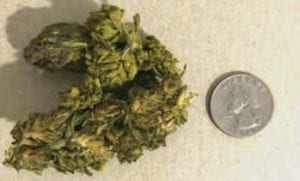 How many grams in Quarter Cannabis

This unit is also called a quad in many areas of the US. It is 1/4th of an ounce. The weight of a quarter in terms of grams would be equal to 7.

All the heavy cannabis smokers buy their weed in a quad bag. Depending upon the area you live in, the price of a quad can vary from $50 to $100. You can smoke at least 15 joints with this much weed. 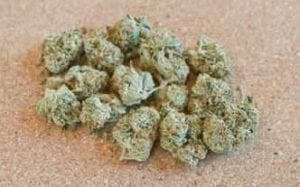 How many grams in Half Ounce of marijuana

Fourteen grams of marijuana is equal to half an ounce. The price of this much weed would be varying a lot depending on the strain, quality, place, seller, etc.

Check out how much weed is there in a half-ounce pack. YES, the photo below is of a massive bud that a Redditor grew in his home growing operation. This massive bud weighed half an ounce! 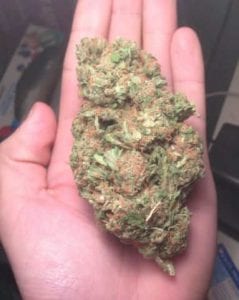 How many grams in an Ounce of Weed

This is the most cost-effective way to buy marijuana for yourself. A lot of the places also gives a bit of extra weed if you buy these big packs.

You will see Oz in a lot of places. Oz is just a short form of an ounce. It is used by almost all seedbanks to indicate how much of a yield a strain seed will give out to the grower.

You can check out our review of the highest yielding marijuana strain here. 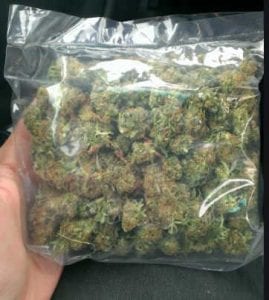 How many grams in a Quarter pound?

How many grams in a pound?

If you go out to buy weed on the street, then you would need to be familiar with the slang people use for various sizes of marijuana packs.

How much marijuana should I buy for the first time?

If you are a complete newbie in the world of cannabis, then we would suggest not to go big on the purchase. Also, you have to experiment first if your body is very reactive to marijuana or mildly reactive.

We would suggest to just buy a gram of weed if you can find, if not, then buy an eighth. You would make two joints with a gram of weed, so you can smoke them and see the effects on you.

After that, once you feel more experienced, then you can go on to increase the buy size slowly. Hiding small quantities of marijuana from prying eyes is also easier than stashing a whole bag in small places.

How much marijuana should I smoke to feel the effects?

Again, this will depend on your body and how it reacts to THC. Generally, people can get effects starting from just 0.25 grams of weed.

We recommend you start out with 0.25-gram joint and then keep increasing the dosage until you feel comfortable with the effects.