White Rhinos are unique magnificent animals known for their flexibility and strength. The same goes for White Rhino in its cannabis strains. White Rhino is an Indica dominant cannabis strain that uses brute power to get its way into your brain. Read this White Rhino Cannabis Strain Review to know more about this giant! 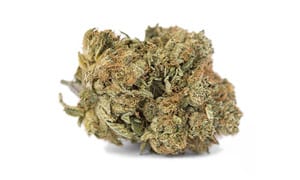 Called for the appearance of the top part of the plant that relates to the horn of a rhinoceros, this strain produces an intense Indica high.

White Rhino marijuana strain was bred by Green House Seeds and is a relative to another popular cannabis strain, the White Widow.

Though marketed as an Indica, White Rhino is a Hybrid strain, presenting about 80% Indica and 20% Sativa genetics. It indicates that you can anticipate a small number of Sativa effects to accompany its expected Indica impact, generating a small cerebral high to follow your mellow body high.

This strain is a blast of many traits that can leave you on your knees, begging to get more. It is a strain with a big power punch that is best recommended to those who are purveyors of pure, narcotic potency.

White Rhino is a popular strain bred by White Label with Afghanistan (Indica), India (Indica), and Brazil (Sativa) genetics. Although having Indica traits with a mark of Sativa characteristics, White Rhino will affect your entire body accordingly. 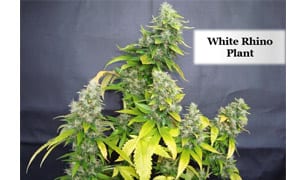 Since White Rhino is a mainly resinous strain, the dried buds are perfect for producing concentrates such as hash oil, wax, or shatter.

White Rhino is relatively easy to grow and thrive well in both indoor and outdoor settings. It reacts exceptionally well to particular growing methods like SOG and ScrOG and under the right circumstances.

Growers who have understood the whole science of marijuana breeding can achieve a yield of up to 800 g from a single plant!

Along with ideally fertilized soil, the plant of White Rhino also needs well-regulated lighting and watering. This cannabis strain flaunts superbly in a growing chamber or greenhouse. Grow this strain outdoors only when you have warm and sunny weather.

White Rhino cannabis strain produces excellent outcomes when you grow it using some particular methods such as Screen of Green (SCROG), Sea of Green (SOG), or Lollipopping.

This marvelous cannabis strain grows well in nearly all environments except for the ice-cold climate. It is recommended that you keep the White Rhino plant at a usual 68-80 Fahrenheit with a proper humidity level.

If you follow such instructions while growing this strain, you will not really have any trouble raising this classic Indica strain. Just make sure you feed it enough since it requires a lot of nourishment. 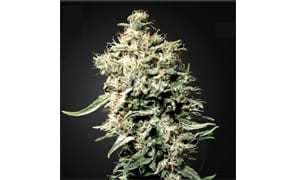 As stated earlier, White Rhino received its name due to its unusually pointed leaves and bud structures, making it seem like a rhinoceros horn emerging out of the plant.

Though White Rhino plants tend to become rather thick and full, in keeping with most Indica hybrids, it can grow unusually tall as well.

The bud of this strain itself is gorgeous. It has sufficient quantities of dripping trichomes that stick to the outer plant, giving it the occurrence of possessing a white sugar cover all along the surface.

If grown and dried perfectly, the buds from this cannabis strain carry many trichomes, also known as glands. Not only does this make them look charming, but it also suggests they are highly potent.

As might be assumed from a strain with 80% Indica traits, the White Rhino plants remain very dense during the flowering stage. They have only a medium height gain, and flower quickly.

White Rhino, when planted indoors, can yield a hefty 900g per square meter of the flower. It takes around 9 to 10 weeks for this strain to blossom and be available for a generous harvest.

When kept in an outdoor setting, White Rhino favors a moist but not overly wet climate. This strain gets ready for harvest approximately in early October when it can produce a high 1200 g of dank bud per plant.

White Rhino can offer massive yields of up to 900g/m² with just nine weeks flowering period. White Rhino cannabis strain is every grower’s dream since it generates a way above average of fantastic quality buds.

Thoroughly bred, this strain is quite high in its THC content and is, hence a generally popular medical strain to go for. To know more about the cultivation of White Rhino Strain, Click Here!

Fragrance and Flavor of White Rhino

Just like its parent strains, White Rhino holds a unique earthy smell that is supported up by elements of dense wood, such as oak and maple.

You can expect to detect the tranquility of an old forest when first breaking up the bud, as well as a tenacious sweetness that is not too different from sweet tree sap.

Once inhaled, the sweetness begins to disappear, followed by a thoroughly oaken smell that is hugely evocative of antique shop furniture.

Similar to a lot of other Indica strains, White Rhino’s flavor is quite related to its fragrance. This strain has a taste that can be defined as a skunk, pungent, earthy, sweet, with woody overtones—this complex blend of flavors represent the best of Indica cannabis traits with an old school funk.

Whether you purchase it or try cultivating it yourself, make sure you give it a few minutes for the high to hit. It might look like your bud is somehow inadequate, but give it some moments, and you will soon find the rhinoceros horns.

White Rhino strain produces a dense sweet-tasting smoke that will expand in your lungs, creating hits of this medicine much more significant than you might first assume.

Being remarkably potent, this strain will put you in a trance and make your entire body sense numbingly high. Sniff enough of this weed, and you will undergo full-body couch-lock, making it the ideal strain to deal with pain as well as unwinding relaxation on dull nights.

Due to its high THC content, White Rhino is a popular cannabis strain among buyers looking for heavy-handed recreation and pain relief.

The initial experience of White Rhino will be one of extreme euphoria, as well as a usual numbness in the body, but still giving a pleasant Sativa buzzing beside it.

This is followed by a comforting sensation of harmony and tranquility and the slightly overpowering desire to take a short nap.

In contrast, several other strains give you a feeling of calmness and a strong urge to watch some ugly TV show on repeat; there is an innate sense of purpose to the high produced by White Rhino.

You can expect to experience overall euphoria and relaxation, but still, you’ll feel motivated to view the world around you.

However, the feeling of tiredness usually prevails, enabling White Rhino to be of great interest to those who face problem to sleep at night.

White Rhino is an excellent sedative and relaxant, giving you in a happy daze. A particular euphoric state can also be reached with this stunning strain.

The outcomes of this strain are like an unstoppable power that takes on for hours. Like many Indica prevailing strains, this one should be practiced in the evening or at night and can be somewhat effective at treating insomnia.

White Rhino is famous as a medicinal strain, with some inmates using it to tackle insomnia, pain, and other traits/ailments.

White Rhino is a very efficient painkiller, and it has confirmed to be useful for patients who undergo from minor and major aches, immediately relieving them for hours on end.

This strain can reduce pains from muscle spasms, joint pains, migraines, toothaches, and even menstrual cramps, making it a potent medium to manage pain.

This strain has well-treated mood disorders. Since it is a heavy body Indica, White Rhino is the ideal medium to help with insomnia because it will make you sense very drowsy and relax your brain enough so that you can relax into a night of peaceful sleep.

Depression may also be managed well with this strain, as it is an excellent mood-elevator.

White Rhino is also proven to be very beneficial for cancer patients who may have lost their food cravings due to chemical therapies such as radiology and chemotherapy. This Indica dominant strain is useful at stimulating your appetite.

A lot of users have also said that it is an excellent option at tackling fibromyalgia and Chronic Fatigue Syndrome, as well as just commonly enhancing the mood of whoever consumes it.

Side effects of White Rhino

The high amount of THC is what makes White Rhino a little bit risky for new users of marijuana. If you aren’t used to the strong kickback of White Rhino, you might find yourself hit entirely out of your mind.

This is also another viable reason for why it is named White Rhino – it kicks you so strong that you might actually think a rhino had struck you.

You might experience some common side effects such as the dry mouth and dry eyes to disturb you for a short while after working with this strain.

It often generates an urge of eye rubbing that might leave you with some of the marks on your eyes if you are not concerned.

Like Super Skunk carried along with the Skunk #1 success story, White Rhino by White Label is also overseeing for new shores. This strain comes in the group of some of the most expensive buds in the market. But quality always comes with a price. White Rhino gives off a sincerely clear high that is compelled to relax you from head to toe.

With an intense taste and smell that is perhaps the closest you will ever get to smoking marijuana that scents like a plank of fresh oak wood, White Rhino is widely accepted among cannabis aficionados that are scanning for new and exciting taste adventures. Read more reviews of cannabis strains Here!