Experiencing euphoria is one of the pleasantest feelings of being human. A sense of euphoria can be induced by certain aspects of life, such as eating delicious food, exercise, sexual satisfaction, exciting life events, achievements, love, and many more. But guess what? Certain weed strains can also naturally render a sense of euphoria! Are you in search of the best cannabis strains for euphoria? These ten strains can make you feel blissed out and intensify your puffing experience. 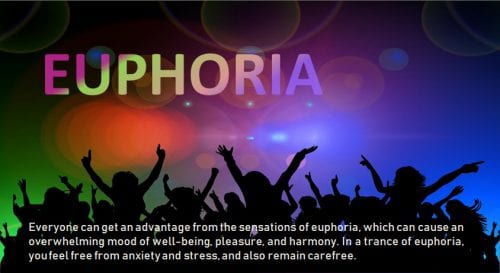 There are a lot of cannabis strains to pick from when it comes to producing euphoria. Sativa, Indica, and Hybrid strains are capable of rendering euphoric effects. Thus, choosing the strain type is your personal preference.

Cannabis is an amazingly diverse species comprising thousands of individual strains that vary in their germination, effects, and taste. Due to unique cannabinoid and terpene profiles, some strains are excellent for sleep and recreation. Others, however, can induce states of motivation and focus. But when you strive to have a perfect moment with buddies— or alone for that matter— the best weed strains to prefer are those that deliver a state of euphoria, producing hours of giggles and laughter. 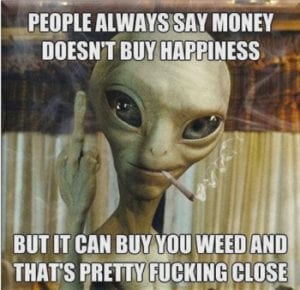 After years of cross-breeding and producing hybrid strains that combine the perks of several genetic into one plant, we now have many weed strains to select from for almost any activity.

While sometimes it’s pleasant to feel more energetic, a sense of euphoria is often sought after by recreational and medicinal consumers.

Although most weed strains cause a positive transformation in the state of mind, some cultivars produce the perfect symmetry of phytochemicals to boost euphoria. We’re not discussing a slight increase in confidence or giggle, but euphoria is a state of extreme excitement and delight.

As we know that cannabis causes red eyes, it also makes you smile. Smoking weed leads to enhanced dopamine levels in the synapses —a neurotransmitter responsible for great mood, satisfaction, and happiness.

Every strain that carries substantial THC levels produces a euphoric effect to varying shades. The cannabinoid binds to CB1 receptors and launches a chemical reaction that ends in dopamine release.

Apart from that, it’s rare for marijuana to cause a pressing reduction in the state of mind. That is hoping, of course, that you know the basics of your tolerance and suitable dosage.

What’s the Role of THC in Euphoria? 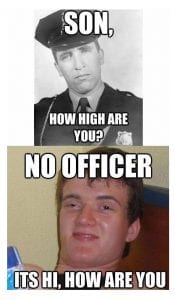 To answer shortly: All of it. THC is the chemical in weed plants that delivers people the emotions of euphoria that have presented marijuana as a party consumption herb. Moreover, it can treat patients with depression, anxiety, stress, and many similar illnesses. Have you ever felt high after smoking weed and have random giggles? That’s the THC talking!

Cannabis strains were rarely a concern to many users before legalization. Now that consumers can walk into seedbanks, people are getting that not all weed is similar. People have been cultivated cannabis plants for thousands of years, so that there are now thousands of different marijuana strains available.

Furthermore, each strain has distinct characteristics. Some hold a tiny amount of THC to help sufferers reduce pain without getting high. Some breeders grow cannabis to provide high amounts of THC for solely recreational purposes. Then there are the countless strains in between.

Since there are various marijuana strains in the world, and it can be incredibly amazing to look through all of them, here you will find a go-to list of ten of the most compelling euphoria-inducing strains for your entertainment.

Are you feeling low? Here’s the majestic list of the best cannabis strains for euphoria. Known for their therapeutic objectives, the most sought-after strains for euphoria and that “high” feeling can also be beneficial for other symptoms, including relieving depression, making love, or elevating your yoga practice. 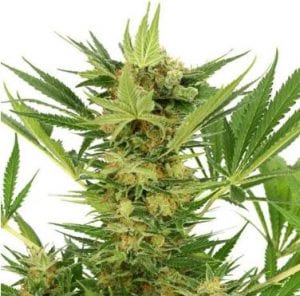 Even though the name sounds quite fierce, AK-47 is extraordinary compared to other euphoric strains that leave you perfectly softened after a hard day. The strain holds nearly 20% THC level.

It is known for imparting a feeling of harmony, increasing creativity, and making your body relaxed. Individuals have also professed to experience couch lock, where they feel unusually quiet and high.

Moreover, just a couple of puffs can handle your insomnia and make you fall asleep. However, this drug may cause a couple of symptoms like dry mouth and spells of dizziness. 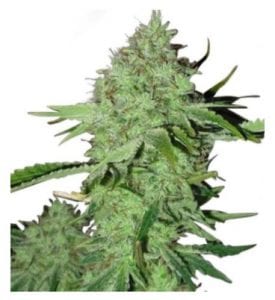 Crystal buds deliver a well-balanced euphoria fusing a cerebral high with a sedating effect. This feminized weed is 60% Indica and 40% Sativa. Besides, it renders a very potent high, not suitable for first-time smokers.

Because the strain contains nearly 25% THC (very high) level, you’ll experience a cerebral buzz throughout your mind and body. The effects of this weed are not noticeable immediately. Instead, the euphoria initiates after a while and then crawls up on you altogether.

Nevertheless, when it does, you’ll experience an exceptional, energetic high. It loosens up your nerves and soothes your mood, making it an effective tension reliever. 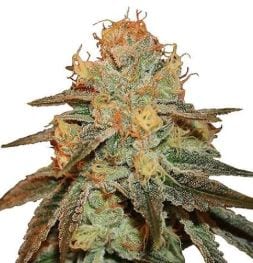 Based on the original prize-winning Bruce Banner, the strain is a mix of OG Kush and Strawberry Diesel, with average hereditary qualities of 60% Sativa and 40% Indica. Morever, the strain holds up to 25% THC content.

This strain is famous for being highly influential. Having just one puff, and it soon bodes well why this strain got its name after a bulky green superhero. However, in contrast to the movie’s character, this strain produces a pot of happiness and not hulky anger.

After inhaling just one puff, Bruce Banner can make you euphoric, followed by energetic satisfaction that renders a relaxing feeling of creativity and well-being. 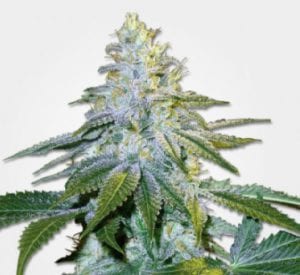 Reproducers developed this feminized ‘Euphoria’ strain in 1996. It is a brilliant strain that is substantially potent. The taste you feel while smoking isn’t so sweet as other luscious strains. The strain holds about 19% to 22% THC content.

A superb blend of the Skunk and Sativa genetic qualities is promptly evident in the smell and taste. The Euphoria strain came through the natural skunk that radiates from the buds and leaves after harvest.

The smoke transmits a calming yet lucid high. Continue pulling on it, and the more calming effect will kick in, leaving you hummed thoughtfully yet still unfit to move. 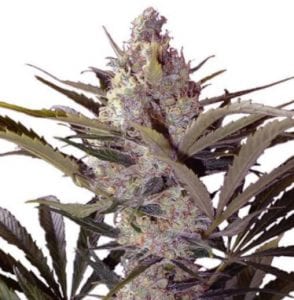 Dark Widow alludes to a crossover as impressive as the deadly, venomous spider, after which it got its name. Its euphoria is guaranteed to transform your grumpy mood and leave you feeling happy. It should help with depression if you go for the enthusiastic lift and cerebral high of the Black Widow strain.

Furthermore, the Black Widow is a potent cannabis strain with a 15% to 28% THC level. It accompanies some significant medicinal properties while offering a not too lousy degree of CBD. The effects of Black Widow are generally euphoric.

Additionally, the Black Widow is conceivable to induce slight cerebral pains and dizziness in new or occasional users. On the other hand, some users may experience dry mouth and red eyes. However, the effects are not generally unsafe, as they may also induce some form of mental creativity. 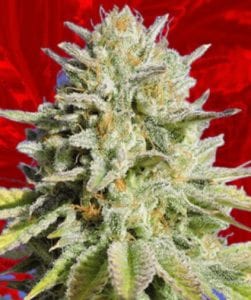 Known as one of the most potent cannabis strains, Gorilla Glue #4 is a crossbreed with a lineage that pulls back to the Chocolate Diesel, which renders potent euphoric effects. Gorilla Glue #4 brings a similar euphoria with emphasis on a warm, comfortable body high that makes the mind feel relaxed and makes the perfect relaxing high.

The strain holds between 18% to 25% THC content. Gorilla Glue #4 won many cannabis competitions around the world. It even got an award in the High Times Jamaican World Cannabis Cup, which compared strains from various nations against one another to determine which had the greatest potency and quality. 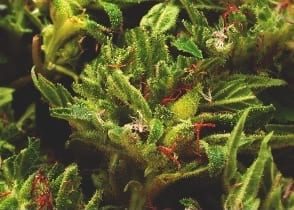 The strain holds up to 20% THC content. It merges the uplifting high of the Snow Lotus with the substantial, profound bass of Girl Scout Cookies. Besides, this inter-galactic cake-mix plant grows in only nine weeks. 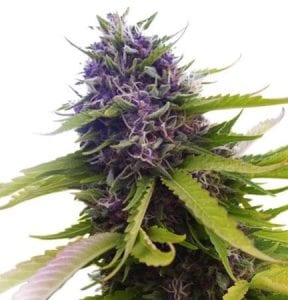 Blueberry marijuana seeds might be famous for its irresistible smell and flavor, but this strain is more than its terpenes. Furthermore, Blueberry contains up to 16% THC level. Blueberry is a potent Indica strain that delivers a euphoric high. It is a profoundly relaxing strain with tranquilizing effects. Furthermore, it’s the perfect evening strain or for when you have to unwind at night.

Blueberry also includes mood-altering Sativa qualities that bring out the happy feelings hiding inside, leaving you feeling giggly on the inside and smiling outwardly. The euphoria mixes with a profound unwinding to further ease you into a pleasant smoothness. In the end, you feel happier without anxiety or extreme energy. 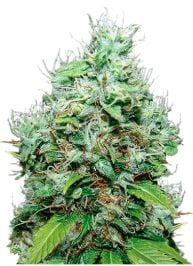 This strain has won nine different Cannabis Cup awards, showing it to be a mainstream preference among the connoisseurs. The strain holds up to 21% THC content.

NYC Diesel is a well-known strain for wake and bake. Besides, it’s energizing and assists with creativity. Furthermore, you can experience these effects by a definite feeling of unwinding over the body, removing some of that initial energy.

The strain tastes citrusy and sweet, a great taste matched with euphoric effects. It’s one of the favorite strains among users for many reasons, with euphoric happiness as only one of the numerous positive effects. 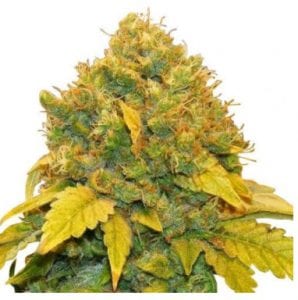 Even though it smells like bananas, this brilliant green Indica-dominant strain delivers a long-lasting, potent high as stable as its aroma. Banana Kush is a fragrant, social smoke that renders a sweet, mellow buzz. Besides, it is in trend on the US West Coast for its flavor and effects. Moreover, it is stimulating buzz makes it a go-to for artisans.

The genetic qualities in Banana Kush are mainly responsible for such a sparkling influence. Moreover, it has an exceptionally high THC of up to 27%. Furthermore, the combination prompts a mellow, euphoric head buzz combined with delicate body unwinding to provide those prestigious chill vibes. Positive and uplifting vibes are necessary to induce a feeling of happy euphoria, in which Banana Kush prevails.

Euphoria is an excited and cerebral state in which a person experiences intense sensations of delight, laughter, and well-being. Besides, euphoria can be induced naturally or by any stimulating substance, such as psychoactive stimulants, kratom, or marijuana. One can also experience it while doing their favorite activities that include gym exercise, sprinting, sex, yoga, or dancing at a club party.

With so many cannabis strains to pick from and a wide variety of effects, it’s tough to get tired consuming cannabis. When candid times roll around, there’s nothing better than going to do what you love with a sparkling euphoric strain.

Many other marijuana strains will render a sense of euphoria than the above list, but these are some of our best picks to get ‘euphoric’ high. Comment below and vote up the best cannabis strains for euphoria, and include any missing strains that have helped you experience ecstasy.

Get yourself some uplifting buds, and be ready for a joyous weed time.

Click here to pick the best cannabis strains for sex