Welcome to 420 Expert Adviser! We have brought you a cannabis buying guide to buy cannabis in the UK  like a pro!

A couple of countries in Europe are also easing their opinions toward marijuana. Several allow medicinal marijuana usage in some form, although the system is not quite the same as in America.

Portugal, Spain, and the Netherlands have decriminalized personal use of marijuana, too.

So, what about the UK? As one of the more powerful nations, the UK’s stand surely matters. But what is the legal status of cannabis in Great Britain?

Cannabis in the History of the UK

Experts believe that people used to grow hemp and cannabis in the UK for ages. People found weed seeds in a well in York, which experts accepted dated back to a tenth-century Viking settlement.

Further excavations uncovered that people mostly grew it around the coastal areas, which suggests that the UK public were using the fiber for fishing purposes, such as making fishing nets and ropes.

In fact, hemp was so significant to the people of the country that King Henry VIII made a law in 1533, insisting that all landowners had to cultivate allotments of hemp.

Queen Elizabeth I, his daughter, later increased the quotas to cultivate and introduced penalties for those who failed to meet the required targets.

People didn’t see cannabis as a drug or medicine until the mid-1800s. William Brooke O’Shaughnessy reviewed the effects of the plant while working in India, and his reports brought cannabis to the consideration of medical experts in the UK and past.

Although marijuana began to be prohibited in the UK colonies, it took some time longer for the authorities to boycott it in the UK itself.

The British Indian Hemp Drugs Commission stated that “little injury” was caused by its use. It wasn’t until 1928 that people finally recognized it as a ‘dangerous drug’ and restricted.

Although individuals continued to use cannabis in the country after this, its use wasn’t mainstream until the 1960s.

The government declared cannabis as a ‘Class B’ drug – the second most dangerous grading in 1971.

Can You Possess and Consume Marijuana in the UK?

Marijuana was made completely illegal in the UK in 1971 – in the Misuse of Drugs Act.

It is still not allowed to possess or use cannabis in the country, though the penalties aren’t too harsh if the police find you with small amounts for personal use.

The authorities have classified it as a ‘Class B’ drug, along with codeine, amphetamines, ketamine, and barbiturates.

If police find a small quantity of cannabis in a person’s possession, they are most likely to give a warning or give an on-the-spot fine of £90.

It applies regardless of whether the marijuana belongs to the offender or not. If the offender is under 18 years of age, the police reserve the option to inform the offender’s parent or guardian.

According to some reports, the authorities generally adopt a laid-back approach to prosecution of cannabis use and possession.

For instance, rates of prosecution in Cornwall and Devon are as low as 15%, and Durham’s police force have said that they no longer target recreational users at all.

What are the Punishments?

The penalties can be modified, depending on the followings:

The highest sentence for possessing weed is as long as five years in prison, an unlimited fine, or both.

The government of the UK reviewed the drug policies toward the beginning of 2019. To the disappointment of marijuana advocates across the country, they declared that there are no changes.

However, the appointed chair, Dame Carol Black, declared that she would review the impact of the reformation in other countries such as Portugal and Canada – both known for their progressive laws.

One supporter, writing for The Guardian, highlighted the advantages of cannabis law reform, stating that vendors can only sell cannabis to adults under legal regulation.

The market could be burdened, policing costs would fall, and there would be more money to spend on proven prevention, treatment, and damage reduction interventions.

For the time being, though, it seems far-fetched that the UK will move to decriminalize the usage or possession of small amounts of marijuana in the country.

Can You Grow Cannabis Plants in the UK?

The manufacture or production of any drug is illegal in the UK, and it includes cultivating cannabis. However, a UN report found that breeders grew 95 tons of cannabis in the UK in 2016 for medicinal and scientific usage.

It made up almost up to half of the world’s total!

In addition to this, the UK is also the world’s largest illegal cannabis exporter and delivers 67.7% of the world’s total.

Some have called the extensive cultivation for medicinal purposes hypocritical, given how difficult it is to obtain medicinal cannabis in the UK.

Philip May, who is the Prime Minister, Theresa May’s husband, is a significant investor in GW Pharmaceuticals, the producers of Sativex, one of the world’s most normally used medicinal cannabis products.

Medical Marijuana in the UK

There are approximately 1.4 million severely sick people relying on medical cannabis for its therapeutic effect in the UK. Because of the low numbers of these patients being ready to access cannabis medicines through the NHS legally, numerous patients need to depend on cannabis from illicit sources.

The government legalized the medical usage of cannabis in the UK in 2018 following the events of two epileptic youngsters who benefited from using cannabis, gaining substantial media and public consideration.

Cancard is a holographic photo ID, has been created by medical marijuana patients in alliance with senior police officials.

The Cancard will be available to people who suffer from conditions that the private clinics have prescribed since the law changed in November 2018.

Even if the recommendations of the National Institute of Health and Care Excellence accounted for the use of medical marijuana for some of these conditions, access through the NHS has remained non-existent.

This has implied that despite the law changed two years ago, cannabis medications remain past the means of all but a couple of patients.

Carly Barton, the most prominent promoter for medicinal cannabis law reform in the UK, designed the Cancard.

The medical cannabis patients and the Police Federation representing every typical police officials in the UK with a working-class. It includes senior officers from organized wrongdoing and the National Police Chiefs Council supported this scheme.

Those qualified and in possession of a Cancard will have the option to identify themselves to police as verified medicinal cannabis patients. They can also approach an open-source legal defense provided by Cancard if they require it.

Presently, just three products are available to patients. These are:

The medical expert can prescribe these medications only if all other treatment options have proved to be unsuccessful.

In 2017, the UK finally recognized CBD as a medicine.

MRHA, The Medicines and Healthcare Products Regulatory Agency categorized CBD as a medicinal substance, based on its viability. It meets with their standards of safety and quality, which CBD products must maintain.

The Home Office of the UK permitted the sale of CBD oil in the country. The only condition was that it contained close to 0.2% THC (the substance responsible for giving users the ‘high’).

The government has not granted licenses for CBD oil as a medicine. But, the vendors can sell CBD legally, providing that they cannot make any claim about its medicinal benefits.

Some retailers, such as the high street health-food store, Holland and Barrett, sell a range of CBD products as food supplements and topicals containing CBD.

What are the Rules for the Sales and Supply of Cannabis in the UK?

Selling and distributing cannabis is regarded as an unmistakably more serious offense in the UK. If the police find anyone selling or supplying any Class B drug, including cannabis, the offender might get as long as 14 years in prison, an unlimited fine, or both.

In reality, the police infrequently impose these penalties unless the trafficking operation is large-scale or high-profile.

The authorities give the sentences based on the offender’s history, the quantity of cannabis with them, and how they intended to supply it.

The ‘Category of Harm’ is also taken into account. The authorities consider the categories as follows:

Other acts are also regarded as ‘intention to supply’ in the UK. The Drug Trafficking Act (1994) describes trafficking as not just giving or selling cannabis to others but also transporting, storing, importing, or exporting it.

Buying Cannabis Seeds in the UK

As it is legal to purchase cannabis seeds in the UK in 2020, some people choose to do so locally. Of course, people don’t just get them in person. Even if buying is legal, you cannot germinate the seeds unless you have a grower’s license.

Often, they choose to purchase cannabis seeds online, as it’s convenient. Some online sources have numerous strains. They might also ship to the UK.

However, to get the best cannabis seeds, using a legitimate online seed bank is ideal.

Where Can You Buy Weed Online in the UK?

You can buy cannabis in the UK using online facilities such as the ‘Dark Web,’ Instagram, or online dispensaries. The best way to purchase marijuana is to order from the reliable seed banks such as MSNL and Crop King Seeds.

There are numerous online shops available in the UK, such as British Cannabis, Weed Supermarket, and BudGreen. You can look for more options by googling.

There are numerous websites out there that are just waiting to take your money and not send you anything in return. Hence, check this list to find out which websites you have to stay away from.

Don’t forget to read our cannabis buying guide for the Netherlands and France!

Many people in the UK have a generally laid-back attitude towards cannabis use, especially younger individuals. A YouGov survey found that 43% of respondents support its complete legalization; however, almost as many oppose it.

When asked whether the government should legalize or decriminalized cannabis, respondents answered as follows:

The majority of British individuals also regarded cannabis as less dangerous than tobacco or alcohol.

As for medicinal marijuana?

Another study showed that 76% of the British public would consider taking a medicinal cannabis product if their doctor prescribes it to them. Younger individuals (aged 18 to 24) were more prone to believe it – 81% in total!

There are around 80 cannabis social clubs in operation in the UK. Some even have their premises, and most have between 100 to 150 members and thousands of partnered individuals.

The inspiration for the cannabis social clubs in the UK are the trailblazing clubs in Spain. They provided members with a safe situation to cultivate and use cannabis while knowing precisely what strain it was, and how potent.

The act of leaving the European Union will do nothing to change the legal status of marijuana in the UK. The EU doesn’t have control over the possession or sale of weed on a national level. So the UK Government is free to make and enforce whatever weed laws it chooses.

However, Brexit could push the legalization of weed if its impact is as calamitous as numerous individuals predict. If Britain loses tens of thousands of jobs and billions of pounds in EU subsidies, how will it make up for the shortfall?

Its government could easily take a look at the changing popular opinion surrounding weed and choose to legalize it.

The result would be an economic boost that may help save the country from the worst ravages of a foolish and short-sighted decision.

More than half of individuals in the UK are in favor of legalizing the recreational use of cannabis. Even higher measure of the UK populace in favor of its medicinal use.

The discussion about the dangers and benefits of cannabis will probably be a big one in the legal world in the following decade. So when will cannabis be legalized in the UK is a question on numerous minds. 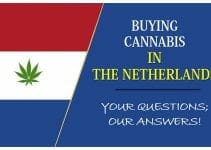