So, Planning to start growing?

We understand your pain of finding an LED Grow Light that makes things easy.

In this Mars Hydro 600W Review, we’ll uncover all the reasons that are enough to justify your decision of buying this affordable grow light.

Mars Hydro 600W is one of the Best Full Spectrum LED Grow Lights for beginner growers.

But, we should rely on the facts more than words when we’re going to put our money in something.

Design of Mars Hydro 600W LED is able to give the maximum in return to the beginners.

Yeah, what we are trying to say is “This light is not going to be a fancy and high budgeted light with advanced functionality and amenities.”

But still, Mars 600W LED Grow Light can enlighten your grow space with quality light. And, your plants can sustain best possible health and can grow well.

As we said initially, we’ll review Mars Hydro Mars 600W in detail and will try to answer some questions that usually arises in a beginners mind before making a wise decision for buying a Grow Light.

Because we were also beginners once.

There are several points where Mars Hydro 600W differs from other 600 watt grow lights. And there are few negative points as well which gives you a reason to not by this grow light for your indoor gardening needs.

In this Mars Hydro 600W Review, we’ll uncover all the facts with a detailed explanation.

Following are the Reasons that justifies the decision to buy it.

This is the first reason to Buy Mars Hydro 600W LED Grow Light.

As we stated earlier, This grow light falls in best affordable grow lights under $150 segment.

Yeah, at very less price you’ll get the best product on the line inside your grow tent.

The number of reviews this grow light have obtained is clearly justifies the point here.

So, if you have a tight budget and don’t want to get cheated by cheap LED Grow lights that are useless then this product is right to go for your marijuana garden.

In this Mars Hydro 600W review our second point which we’ll uncover for you is its spectrum ability.

Yeah, Mars 600W is one of the Best Full Spectrum LED Grow Lights in 600W Segment. 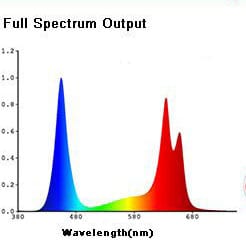 Above listed spectrums generates a purplish shade of light which is good for vegetation and seedling.

But, during blooming plants needs more of red light than blue light in order to produce heavier and resinous buds.

So yeah, if you’re expecting more red spectrum compared to blue spectrum in mars hydro 600W then you’ll not have such results.

It’s pretty much predictable that they’ve balanced spectrum ratio this way because they wanted to give a light that’s good for entire life cycle and they didn’t given a veg-bloom switch that too can be a reason.

Light of this amazing grow light is so efficient and intense that it’s offering impressive PAR value while working. 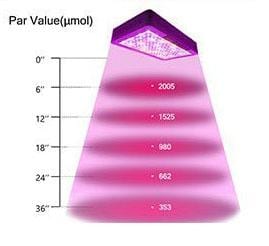 And, as we all know, More the PAR, More the yield.

So, yeah in this Mars Hydro 600W review we’re happy to tell you that buying this light will definitely provide you with greener and healthier plants Because it has better PAR output compared to other cheap level grow lights.

And, by the look and feel as well as by form factor this grow light looks pretty much impressive.

Yeah, this grow light have 18″ X 11″ X 3″ and it weighs around 4.47 Kgs. This figures are impressive and justify its compact look. 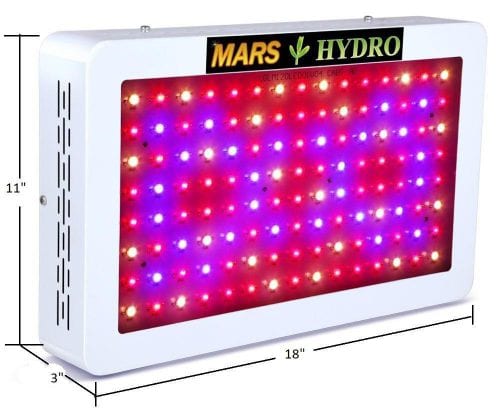 If you’re concerned with other technical specifications then this grow light needs input voltage between 85V – 265V (AC).

Mars 600 is equipped with 120 pcs of 5W LED chips on board. And each LED is placed scientifically that provide your plants with maximum possible dense and intense light.

Yeah, if you’re concerned with focusing angle of Mars Hydro 600W Grow light then it has mixed focusing angle of 90 and 120 degrees. Which helps generated light to spread evenly and still keep some of the light focused on your weed plants.

Zener Diode protects the LED for long run. Yeah, if any one the LED stops working then zener diode will by pass power to other LED and your grow light will not stop working because of failure of one LED.

So, in this mars hydro 600w review its clear that this product doesn’t lack anything from a technical specification point of view.

This is the major concern for everyone.

Because if a thing comes for free then it doesn’t mean that it won’t cost us at all. So, we have to think about its operation and recurring cost as well.

So, in case you’re finding a budget-friendly yet a perfect replacement for you 300W HPS Lighting system then this grow light is a good choice.

Now, one question should arise in your mind.

Yeah, Mars Hydro 600W is neither drawing 600 watt from the wall, nor it can replace 600W HPS system then why they’ve labeled it as a 600W model?

Everyone is either in the same dark like us or they’re predicting things.

And, other guy told us that wavelength that is generated by this grow light is equivalent to 600W LED Grow light, Hence it’s labeled as 600W LED Grow Light.

But none of the above reason justifies the fact according to industry standardization.

Give us some time. We’ll surely update with the facts when we get to know about it.

Still, With 265W you’ll get impressive results at the end. Yeah, definitely it’ll not give you fancy results that are usually observed by using Fancy High Budgeted Full Spectrum LED Grow Lights.

We shouldn’t expect a veg/bloom switch in a budget-friendly LED Grow light.

Yeah, you got my point here. You’ll have to change its height from you canopy according to the phase of your plants.

Recommended height from plants in vegetation phase is 24″ and from that height, you’ll get around 3′ X 2.5′ of the coverage area.

While recommended height during blooming phase is 18″ from the canopy as during this phase plants needs more intense and dense light. And, from that height, you’ll get 2.5′ X 2′ of the coverage area.

This coverage area by a 600W isn’t impressive but for beginner and for those who want to test the things it’s good.

With this coverage and with lack of veg/bloom switch we can only recommend this grow light to beginners because there are other good lights available for professional growers.

Mars Hydro 600W is equipped with multiple fans for the purpose of intake as well as exhaust. And this cooling function is pretty much quiete throughout operation time. Yeah, that’s because it only produces noise value of 56Db.

And, it also equipped with massive pin cushion heat sink which keeps the temperature inside your small grow tent pretty much cooler than any other HPS/MH grow lamps.

Now, let’s take a look at the dark side of this LED Grow Light.

If I’d not buy this grow light then my first reason behind going towards other grow light will be its label of 600W.

Yeah, as we’ve already discussed earlier, Their results are not justifying 600W by any manners.

If you’re neither getting a 600W equivalent replacement for HID nor getting 600W actual power draw. Then, on what basis you’ll trust this grow light as a 600W model?

This model by Mars Hydro isn’t equipped with any UV or IR Lights, which is a major con of this grow light.

But, this grow light is a hot favourite among Marijuana growing community especially because of its value for money nature.

Yeah, you got it correct! Being cheap is easy. But, Being affordable isn’t easy.

Expecting a waterproof light in below $150 LED Grow Light segment isn’t a way to get a good light. But, still, it would make things safe if they’d have included some waterproofing mechanism in this grow light.

Waterproofing makes your grow light durable for the long run.

These are the negatives to consider before making a decision.

But, if you’re still confused then we’d like to brief you on pros and cons of this mars hydro 600W model in short and simple words.

Now, we’d like to make a bottom line for you where we’ll talk about making a decision about this grow light in brief.

Take a look at our final advice for easy decision making with help of our Mars Hydro 600W Review.

If you’re just starting growing indoor then going with this light will be a good choice.

If you’ve experience of growing indoor then we’ll recommend you to try something latest like COB grow light or some fancy light with at least UV and IR lights included because UV and IR increase your yield because that helps your plants to sustain better health.

you can Buy Mars Hydro 600W Full Spectrum Grow Light if you’ve made your decision.

And, If you’re confused about making a decision but this confusion regarding 600W label is your concern then Galaxyhydro 600W model is also a good option.

In case you’ve changed your mind and wants to start with comparatively small grow space then going with 300 Watt Grow Lights will be a good choice.

How many watts does Mars Hydro TS 600 use?

Is Mars Hydro a good light?

Yes, if you’re interested in the MarsHydro 300W, it’s still a good value. They have many other good options as well.
Mars Hydro is one of the top manufacturers of grow lights. The brand is absolutely credible. They manufacture high quality grow lights and covers all the price range. Certainly, You will find a grow light for yourself.

How far should I hang a 600 watt LED light from plants?

What LEDs does Mars hydro use?

The SP-3000 employs high-quality LEDs from Samsung and Osram. During the seedling and vegetative phases of growth, use this light to cover a 4 X 5 foot grow space. Mars Hydro’s light spectrum includes ultraviolet wavelengths.

A 600W HPS system’s ideal hanging height is only 40cm (16″). Even at this low height, much light will shine through the sidewalls and be reflected onto the plants. Some light will be lost since the reflecting materials do not reflect all light.

Is there UV light on Mars Hydro?

At the time, Mars Hydro has no UV or IR bars. Instead, we offer LEDs with specialized spectrums to accommodate a variety of plant growth applications.

The ts600 doesn’t have a dimmer, but you don’t need it. Just adjust the height manually. It comes with all you need to hang your Mars hydro ts600.

In a 4X4 tent, how many plants can grow?

Most growers like something in the middle, with about nine plants in a 4X4 grow room. This will yield around one square foot per plant. However, because autoflowering plants do not have a veg stage, they will always be the same size.

How many hours of LED light are required by plants?